Mouvex 1911 is a special brand. The history of watchmaking, with two capitals H, is complex, changing and full of twists and turns. It consists of great moments, successes, discoveries, revolutionary inventions and key players. It also has its share of defeats, bankruptcies, failures, crises and disappearances. The various wars affected the sector, as did large-scale events, such as the gradual opening of borders or the arrival of quartz. During these crises, some giants in the field have remained firm in adapting or not, other actors have taken breaks, others have simply closed.

Today we are interested in a Swiss watch brand that has belonged to the latter category for decades, but this year presents a new watch that marks its resurrection: this brand is Mouvex 1911. 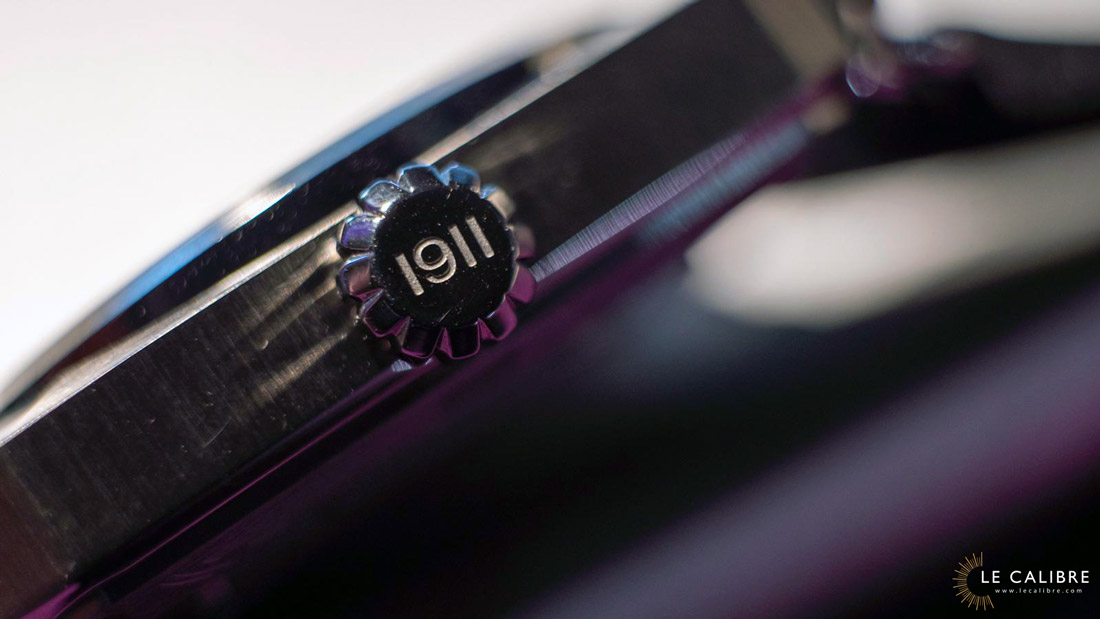 Mouvex 1911 promises to be a century-old brand, even adding its creation date to its logo, Mouvex 1911. So why is it so difficult to find accurate information about its origins? Fortunately, after a thorough investigation, we have deciphered the mystery.

It is the brand Ebel S.A. BLUM & Cie that was created in 1911, in La Chaux-de-Fonds, by Eugène Blum and his wife Alice Levy. His first slogan was: “The third watch of a man.” Understand: “A man’s third watch.”

Therefore, Ebel S.A produced watches with its own name for the national and international market, but did not stop there. Ebel was also the name of his watch factory, which produced watches that he offered under many different brands. And among these brands, you guessed it, we find the name Mouvex 1911, which would have been registered in 1932. 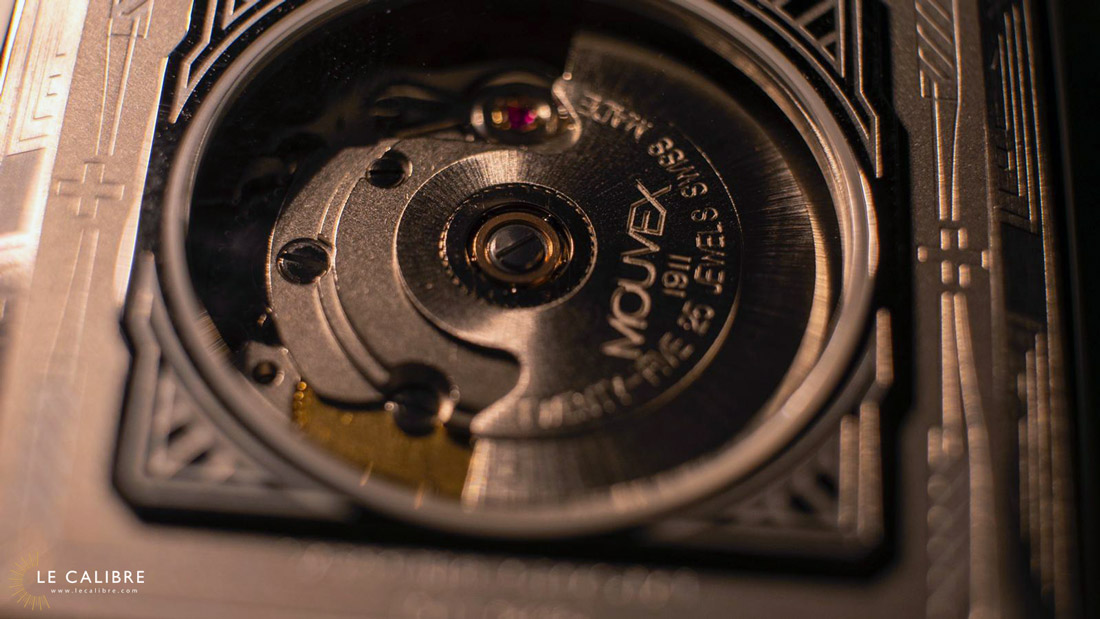 Mouvex 1911, therefore, would be a brand of old Swiss watches, but apparently little has been distributed in Europe. That would explain why it is so complicated to find information about its origins. According to my research, the “Mouvex 1911” printed watches were reserved primarily for export, and more specifically for the US market. Even today, we can notice the fact that the brand’s Facebook page is exclusively in English, and that the official site is offered in French and English. Even his slogan, “Swiss Exellence”, is used in English everywhere in its communication.

Some Ebel watches were interesting mixes between watches and jewelry, others were more classic. One of the emblematic pieces of its range was the Sport Classic, a sports quartz watch launched in 1977, so during the same period of the launching of watchmaking monuments such as the Royal Oak of Audemars Piguet, the Nautilus of Patek Philippe, and I pass.

As for Mouvex 1911, it was active for much of the twentieth century, then it was more discreet and became extinct, especially due to the ravages of World War II. 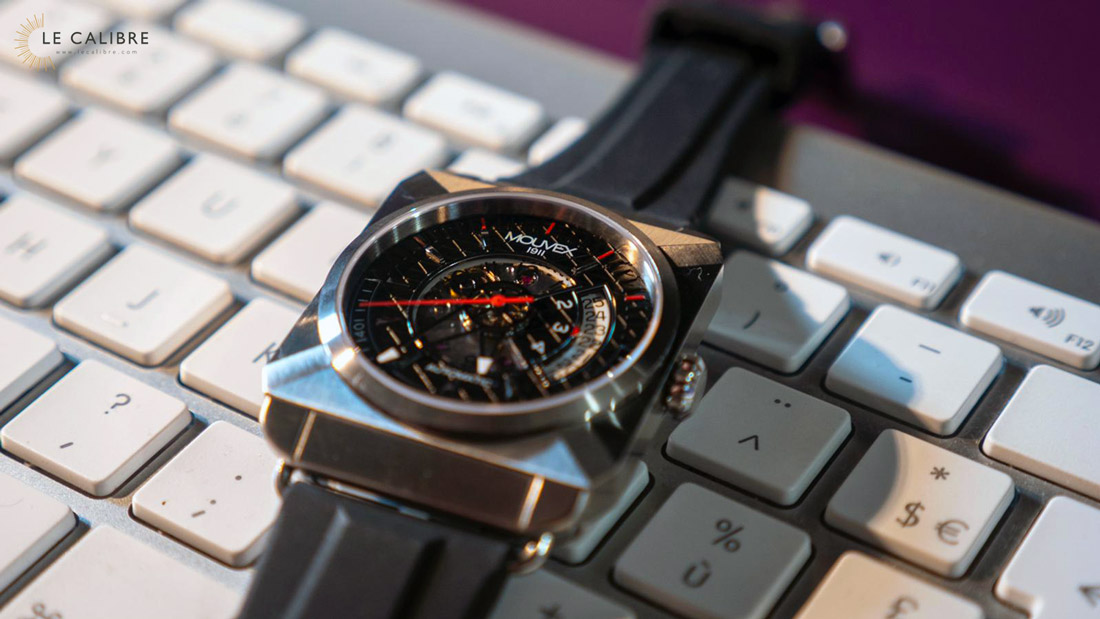 The watch we are testing today is part of the “Art Deco” collection, related to the homonymous artistic movement that dates back to the 1920s. Therefore, this collection marks the 1911 Mouvex revival in this year 2019.

The brand offers a contrast collection, which combines vintage and modern technologies, mechanical and connected, inherited and new, while playing with round and square shapes.

To decide, see our test and video review here. 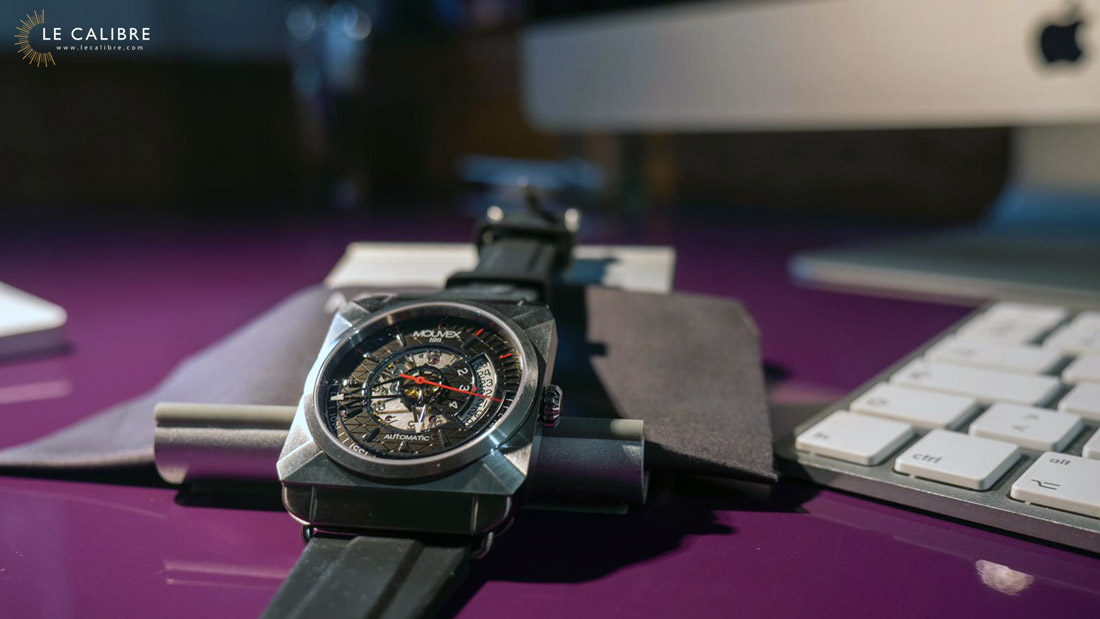 The design of this 1911 Mouvex collection benefits from strong inspirations from the Art Nouveau and Art Deco art movements that emerged in Paris in the 1920s. To this is added the desire to offer a guard – Vanguard Time.

The box is rectangular and measures 38 millimeters wide by 48 millimeters long. Therefore, it is an impressive clock that takes up space and stands out, but remains relatively elegant.

The back of the box is finely engraved with art deco patterns, which adds an aspect that approaches the world of architecture. It is equipped with a round opening that allows you to admire part of the automatic movement through the quality sapphire crystal. 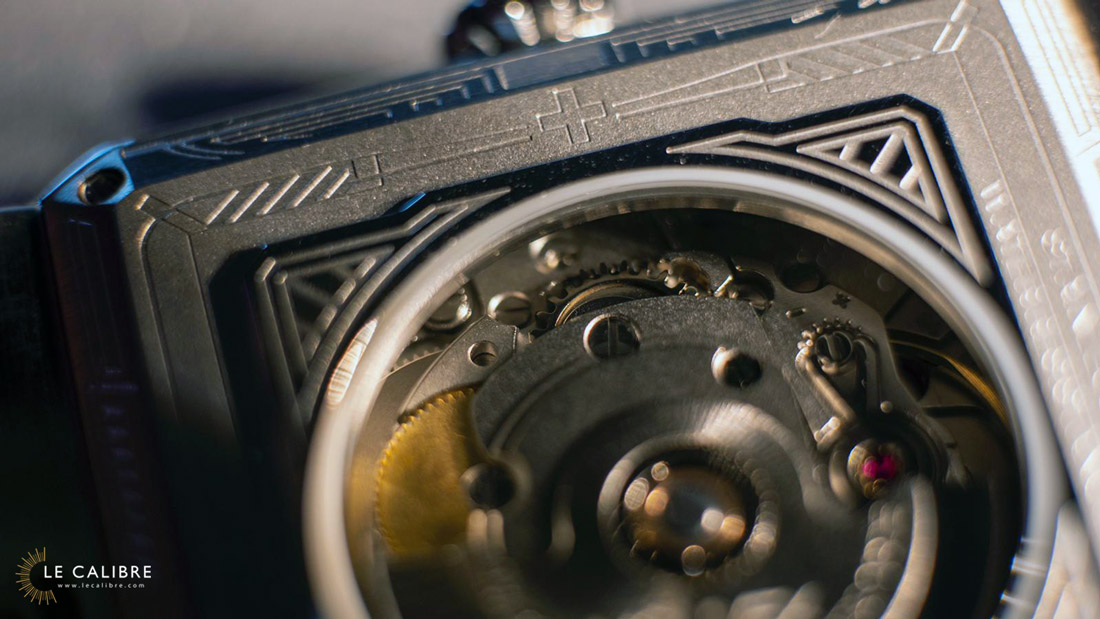 The round dial seems relatively charged at the beginning. It is openwork and allows you to glimpse the automatic movement in the background in its central part. The date window extends over a large part of the dial’s outer band, between the 2h and 5h markers. The rest of this external band is worked with a mesh-like finish, which gives the dial this loaded and futuristic look. It is available in several color options, mainly playing in the contrast of black and white with touches of red. It is protected by a high quality sapphire crystal, anti-reflective treatment.

The hour and minute hands are triangular skeletons with white tips and the second hand with red thread. This trio also gives an interesting architectural aspect. 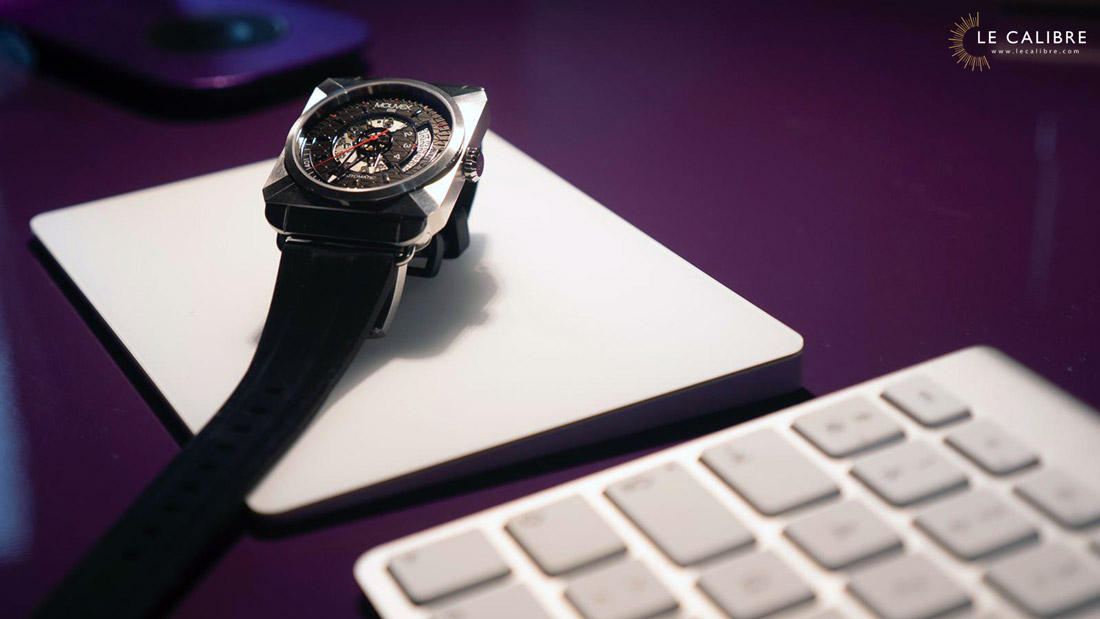 Mouvex 1911 made no concessions regarding the technical choices for this new collection.

The 1911 Mou Deco Art Deco benefits from the “Swiss Made” label, which certifies that more than 60% of its value comes from Switzerland. Its case is made of 316L stainless steel with brushed finishes, and is closed by a sapphire crystal that protects the dial, and another on the back of the case that allows you to admire its mechanical heart.

This mechanical heart is an automatic Swiss movement ETA2824, with an oscillating weight beautifully engraved with the brand name. It is a three-hand movement + date, 25 jewels, simple but robust, offering 38 hours of power reserve. It is used in many watches of brands such as Rado, Tudor, Hamilton or models of the young Code 41 brand.

The watch offers a water resistance of 5 ATM. So remember to remove it before jumping into your jacuzzi. 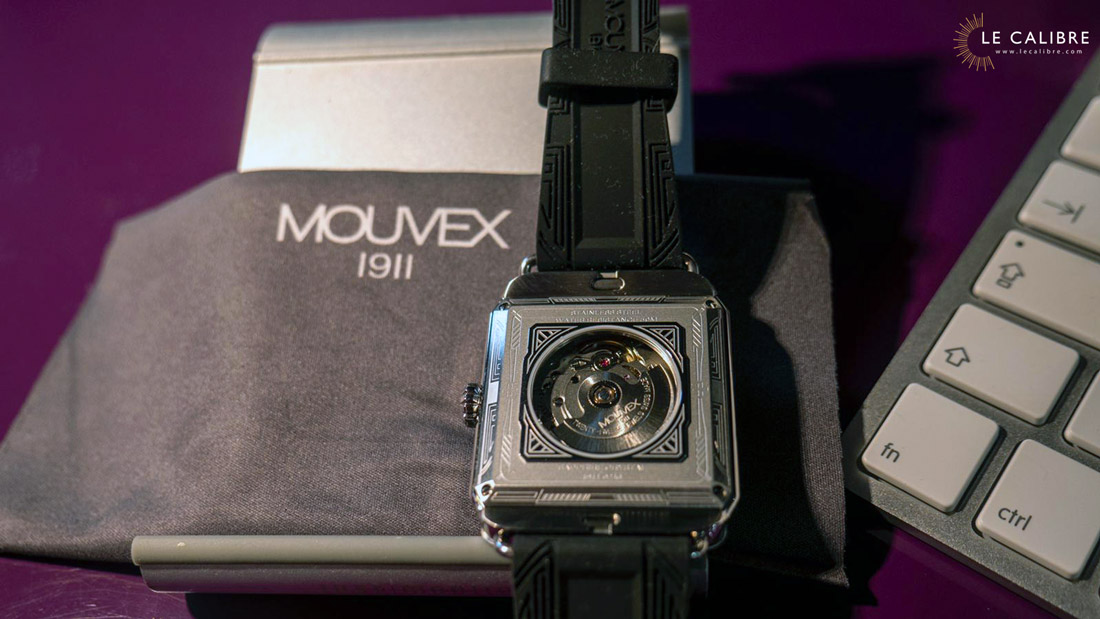 The work on contrasts and the union of aspects that seem to oppose not only was carried out on the clock itself, but also on its accessories. For example, a lot of work has been done on the bracelet, both aesthetically and functionally. Mouvex 1911 is sold to offer the world’s first Swiss automatic watch “compatible with Apple Watch straps”. Actually, it is the strap that uses the same fixing method as the connected watch of the giant silicone valley, which will allow you to use your Apple Watch strap on your 1911 Mouvex, and vice versa.

The watch comes with two straps, which you will have to choose between the proposals. You will find the rubber bracelet with discreet art deco patterns, which accentuates the contrast aspect between the heritage and the contemporary, but also the genuine Italian leather bracelet in different styles and colors, or the Milanese steel bracelet. They are easily interchangeable by hand to allow you to adapt your watch to your current style. 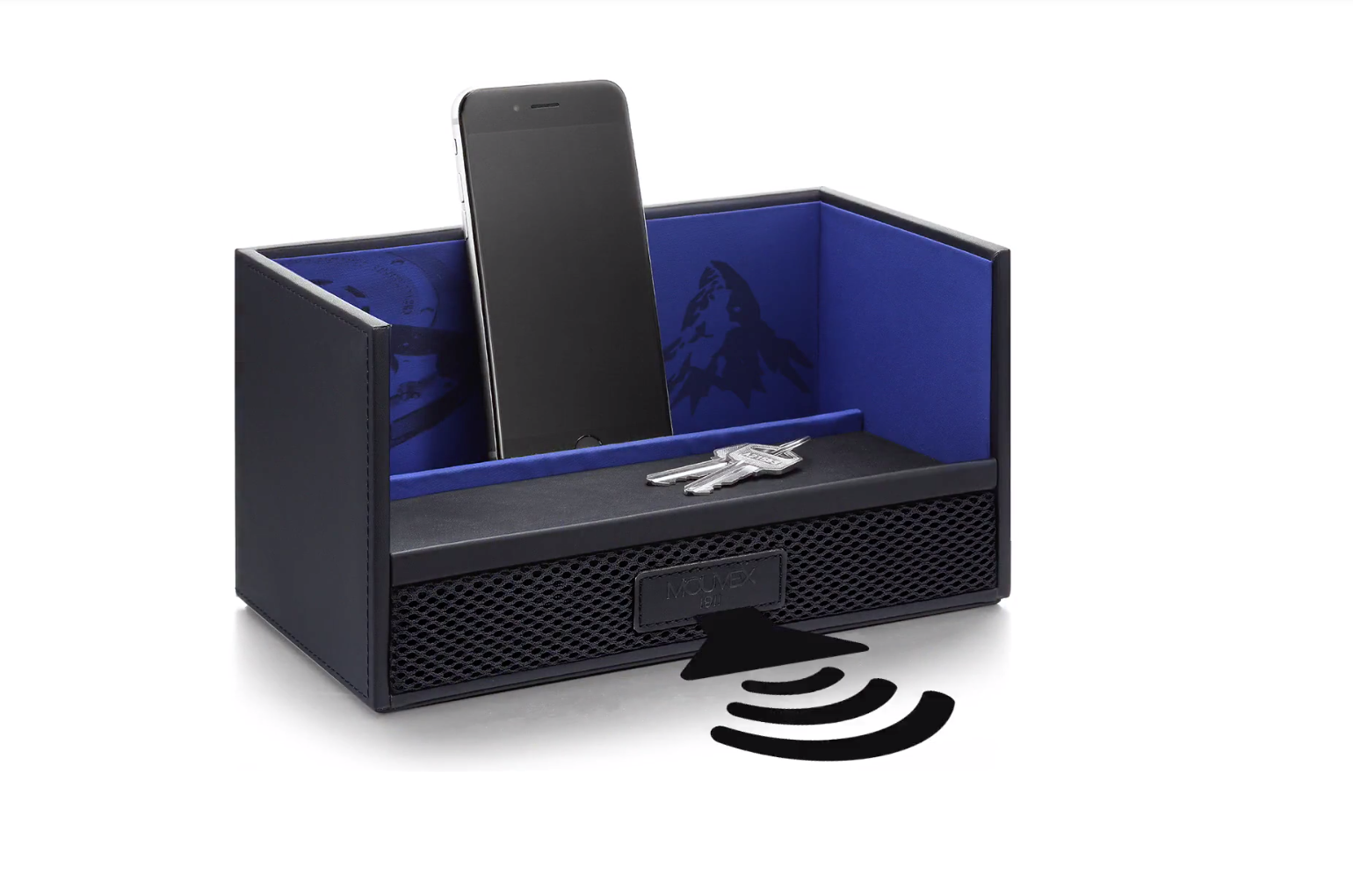 The stage of this 1911 Mouvex Art Deco was also the subject of in-depth research and new ideas. It is designed to serve as a natural sound amplifier when you insert a smartphone or tablet, and it has openings in the back to pass the cables and thus transform it into a charging station for your connected objects.

Regarding this case, I find these ideas interesting in the sense that it gives you a kind of second life. But for me, the real advantage of this box is the size of its support, which will allow you to use it as a clock screen for your other watches. 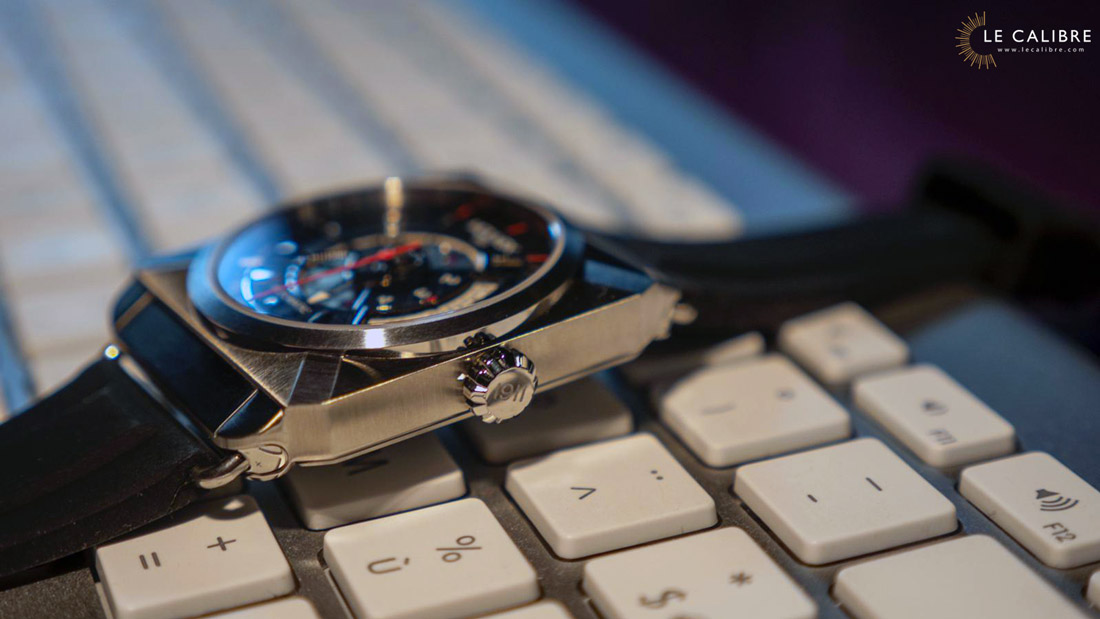 As we have seen, Mouvex 1911 is resurrected with an original collection, which shakes some codes of classical watchmaking and respects a strong heritage. The brand uses robust quality materials. The choice of an automatic ETA movement shows your desire to stay in “Swiss Made” and touch connoisseurs, such as neophytes. Accessory ideas related to new technologies are a bit of a gadget for me, but show a desire to create a contemporary image and get a makeover.

With this interesting Art Deco collection, you will at least talk about Mouvex 1911, and later be free to show the world if your heritage of more than a century is a real advantage or a marketing argument.

The thing I liked the least: