The great popularity of the NATO bracelet deserves that we look at its rich history If the military adopted it for its technical qualities, it was thanks to its aesthetic and fashion character that conquered the watchmaker planet.

In fact, success popular The current NATO bracelet, Daniel Wellington owes it to him. This will surely make the purists scream, but it seems obvious. Look around, ask your little niece or grandchildren, today the multicolored fabric watch strap is great, whether the watch is signed DW, Cluse or Patek Philippe, whatever.

And yet, it is true, the term NATO refers to the North Atlantic Treaty Organization (or NATO in French) and therefore has a military origin. In the following chapters, we will see more closely what it is and how this type of bracelets (since there are several) has become so popular.

The 16th century saw the appearance of the first “wristwatch”. In the 18th century, the names of Jaquet-Droz and Abraham-Louis Breguet are also cited as precursors of the wristwatch. But it wasn’t until 1880 that we found evidence of a Girard-Perregaux delivery of 2,000 wristwatches to the German imperial army. These watches are equipped with a glass protection grid.

In 1904, the watch that Louis Cartier made for his friend the aviator Alberto Santos-Dumont was designed to be worn on the wrist, with a leather strap. On the eve of World War I, the wristwatch was widespread, and not only among the military.

It was after World War I that the armies understood the importance of equipping the soldiers with a “service” clock. In fact, the bidasse cannot afford a personal watch. And this is how the clocks appear in the endowment of the soldiers. The bracelets are made of leather, a material that resists conditions on the ground quite badly, particularly in the theaters of operation in the tropics. 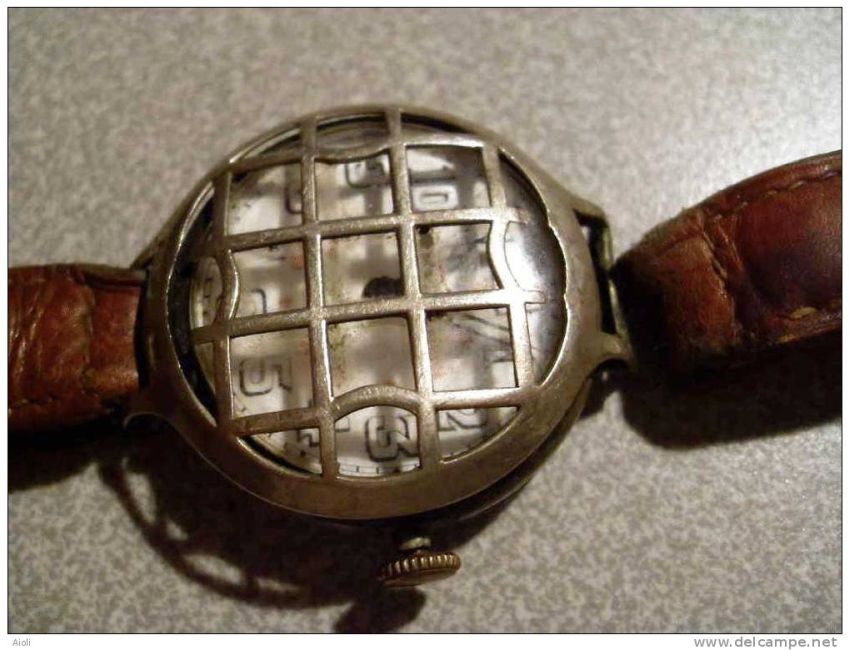 At the end of the Second World War, the US Army defines the AF0210 standard, which describes what can be considered the ancestor of the NATO strap: it is then a watch strap made of 25 cm long cotton canvas, equipped with a steel loop and two ties. 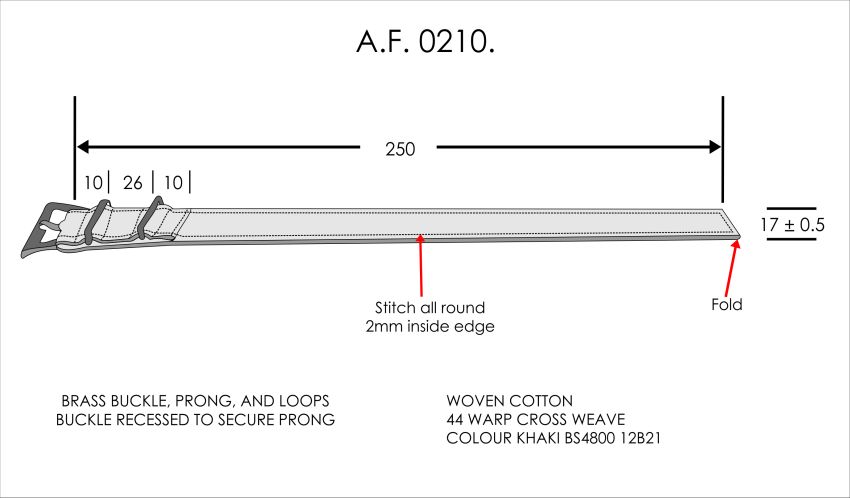 Diagram of the US Army bracelet A.F. 0210 (photo credit The Spring Bar) An evolution of this standard will lay the foundations for the future “NATO”: we see a double strap appear, which will prevent the watch from moving along the strap.

The standard defines very precisely the characteristics of this new bracelet:

This is summarized in the following diagram: 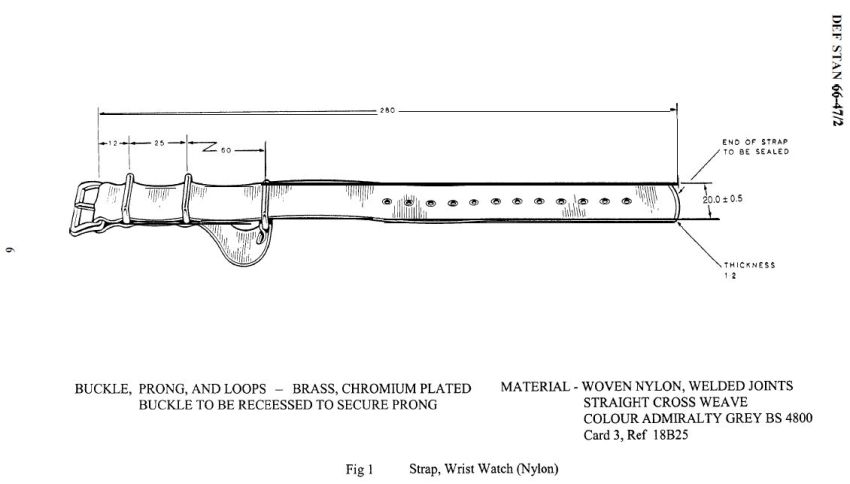 Advantages of the G10

The advantages of this bracelet are important for the military:

I have not found the name of the company that won the first tender, but in any case it is Phoenix Straps Ltd in Cardiff, which still produces the “real” G10 bracelets in the dark color today. Gray Admiralty Don’t look, they don’t have a website, or at least I haven’t found it. However, sometimes you can find this name at random in an eBay or Esprit NATO search.

Also note that the widths of 18 and 22 mm were added to the standard later. In fact, the CWC “British Military G10” was part of the English military endowment, and has an 18 mm horn.

At first, the G10 bracelet is only available in gray. It was only later that the regiments of the British army began to order bracelets with the colors of their units. The G10 bracelet was referenced in the NSN nomenclature with the number 6645-99 followed by 7 digits. NSN means “NATO stock number”. So, to designate these new colored bracelets, it is ultimately the term “NATO bracelet” that has emerged. The following illustration shows some examples of color combinations of bracelets corresponding to specific units of the British army. But not only that, since we found Harvard University there 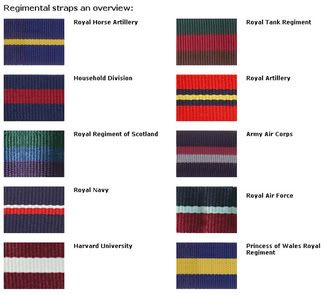 Placing a NATO strap on a watch is very simple, provided you understand the fixing principle.

For this, you can choose: watch our video or read our tutorial:

For those who prefer text formatting, click on “READ OUR TUTO” below.

Before you begin, verify that the watch is well equipped with its two bars. Then you place the flat bracelet on a table with the buckle facing forward. 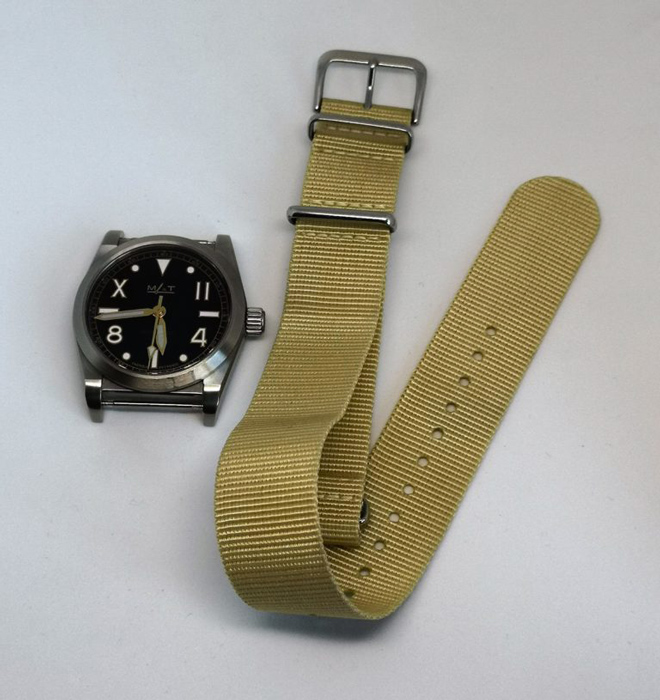 Take the opposite end of the loop and slide it between the bar next to “12h” and the box. Proceed with caution because depending on the position of the bar with respect to the case, the operation can be delicate. 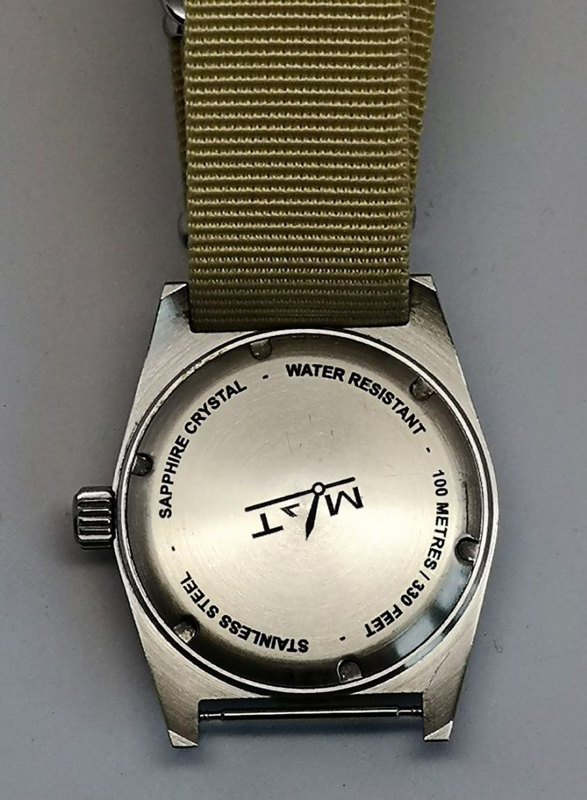 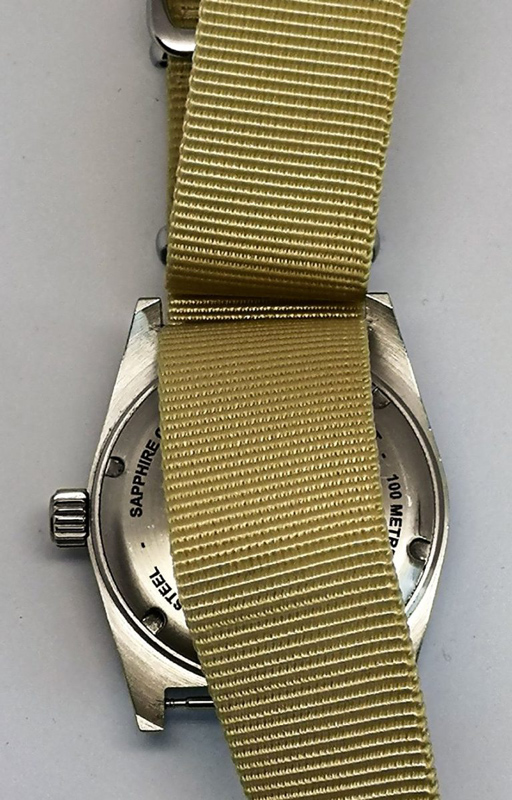 Then pull the bracelet until the first loop is about 1 cm from the box. Then pass the cuff under the other bar and gently pull the cuff so that it fits perfectly to the bottom of the case. 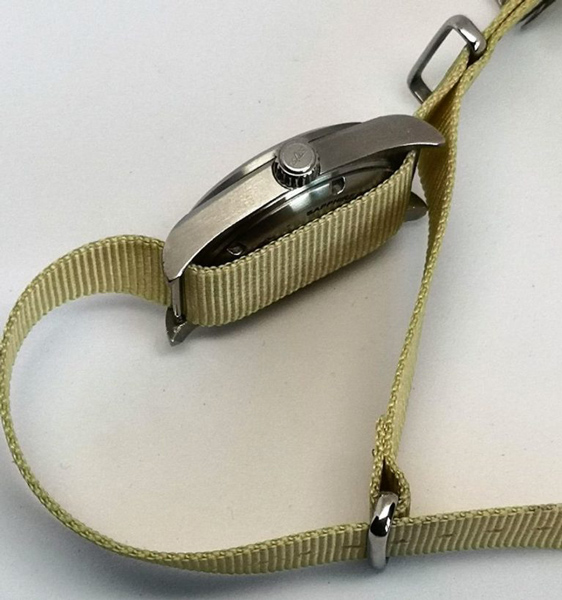 When you close the loop, the excess length can be folded against the loop. 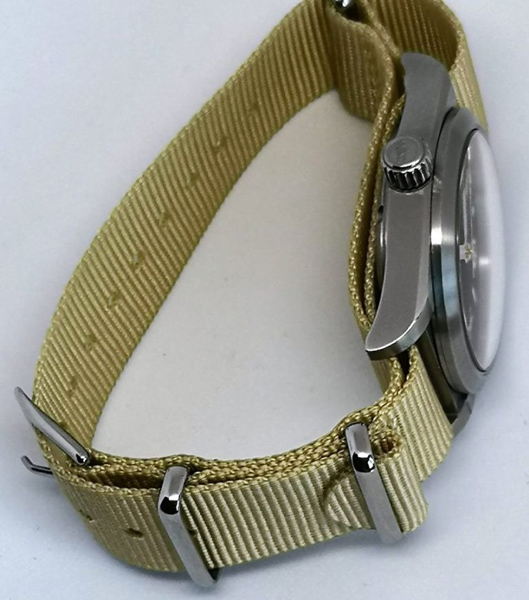 Last setting: make sure the watch is placed in a balanced way between the passers-by. Next, we see that the second clock is too close to the passerby to the right. 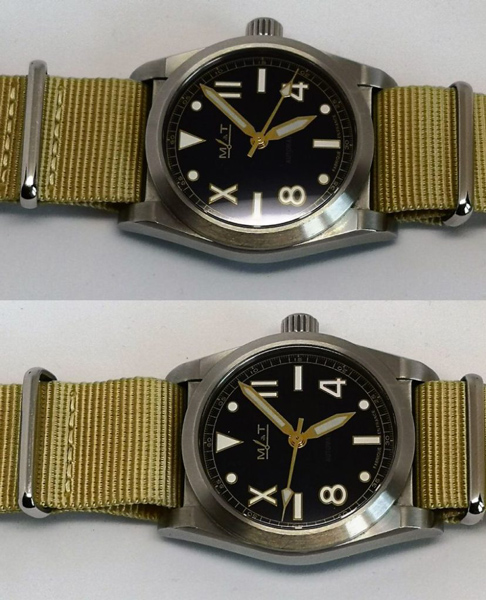 This is what a well-adjusted NATO bracelet would look like: 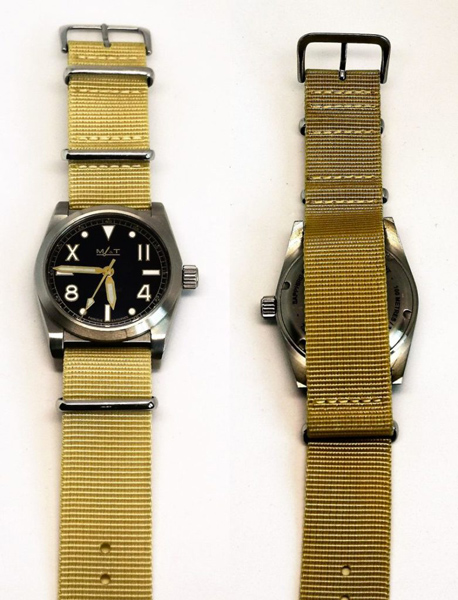 The bracelet inspired “NATO” these days

As mentioned at the beginning of this article, the NATO bracelet has conquered the clock planet. We find it everywhere, both in fashion watches like DW or Cluse, as in high-end watches like Omega and even Patek Philippe.

In this regard, an annual $ 88,000 Patek Philippe 5960 Chronograph calendar in platinum mounted on a $ 10 NATO bracelet appeared on the cover of Hodinkee, which speaks of a “horological hipster epidemic” in New York, as it It has become elegant to put a very expensive watch on a 5 franc bracelet. 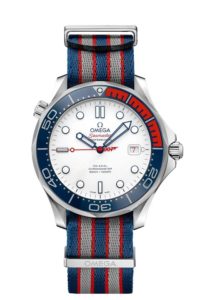 Omega Seamaster Professional 300m “Commander’s watch” with a NATO bracelet in the colors of the Royal Navy (Omega website).

To find out where to buy a NATO bracelet, the Internet is literally filled with hundreds of sites selling NATO bracelets, the price of which ranges from less than $ 10 to $ 400 for exotic leather bracelets.

But we recommend that you consult our partners:

In an attempt to summarize the diversity of NATO-inspired bracelets, the NATO Esprit site is helpful. Let’s try to see clearly:

the “NATO” It is a one piece bracelet, heat sealed or sewn, with two loops between the buckle and the watch, and a loop on the other side. There are two layers of nylon under the watch. Passersby are generally of rectangular section. 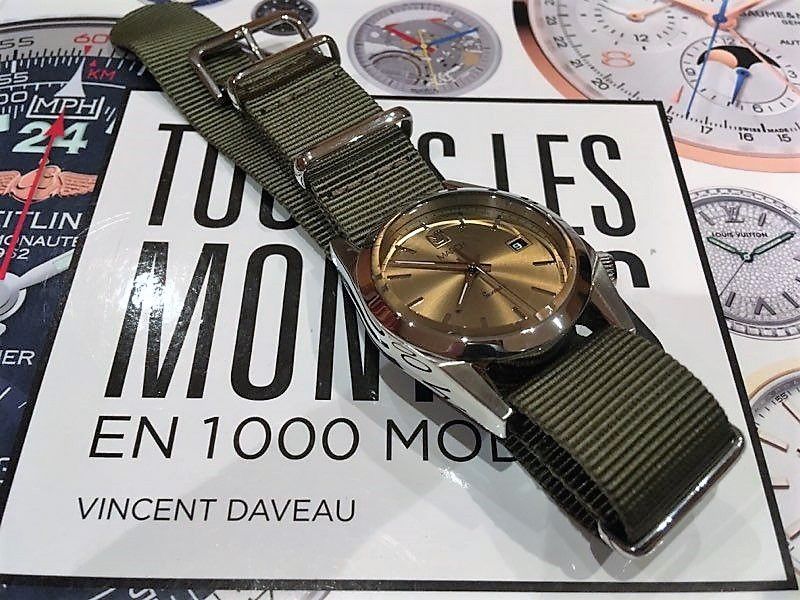 the “American military”sometimes also called “RAF”, is a one-piece stitched bracelet with a single loop, not steel but nylon. It is considered more elegant than NATO. 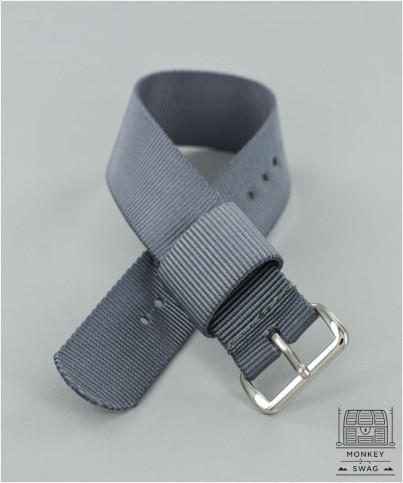 This type of bracelet can also be used with a “Bund”, a piece of leather that covers the wrist under the watch, characteristic of pilot watches. 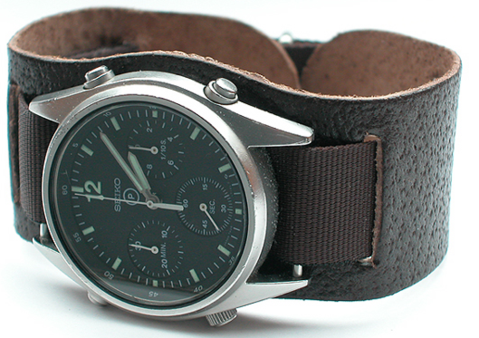 A Seiko with “RAF” bracelet attached to a “Bund”
(Photo credit Ned Frederick from earthlink.net)

Bracelet “Zulu” It is a one-piece stitched bracelet with two round-section metal loops on the side of the buckle, with a single layer of nylon under the watch. Therefore, the watch can slide freely along the strap. 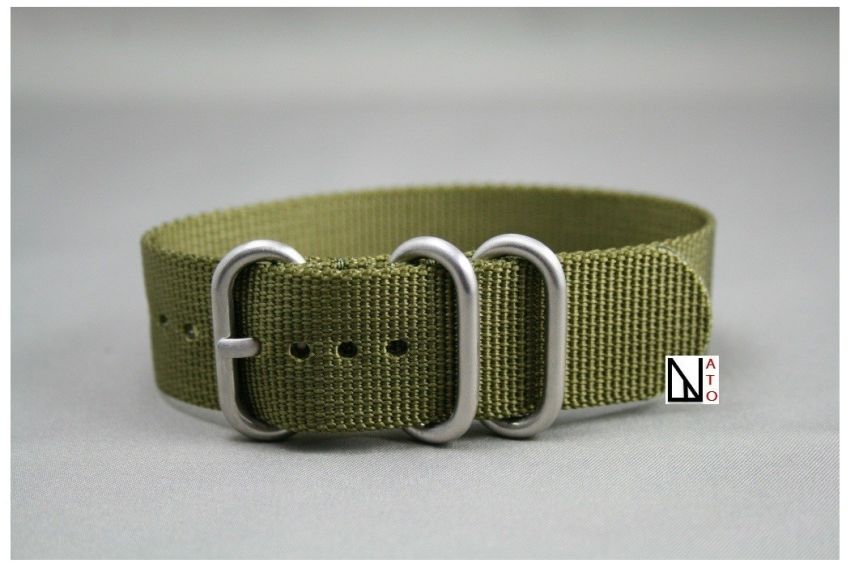 the “NATO – ZULU” It is a combination of the two: the structure of a NATO, with the rounded loops of the ZULU and a total of 4 loops (in English it is called “5-ring strap” counting the loop). The fourth loop eliminates the pressure exerted on the fixing bars, as illustrated in this photo. 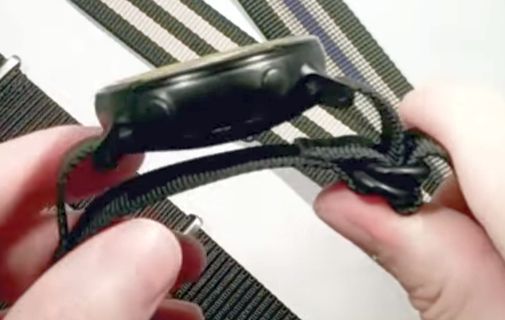 But this configuration is not necessarily comfortable, and if you use it in a classical way, then the fourth passer-by becomes a problem, it gives you the impression of using a minute repeater with the two passers-by that touch each movement. 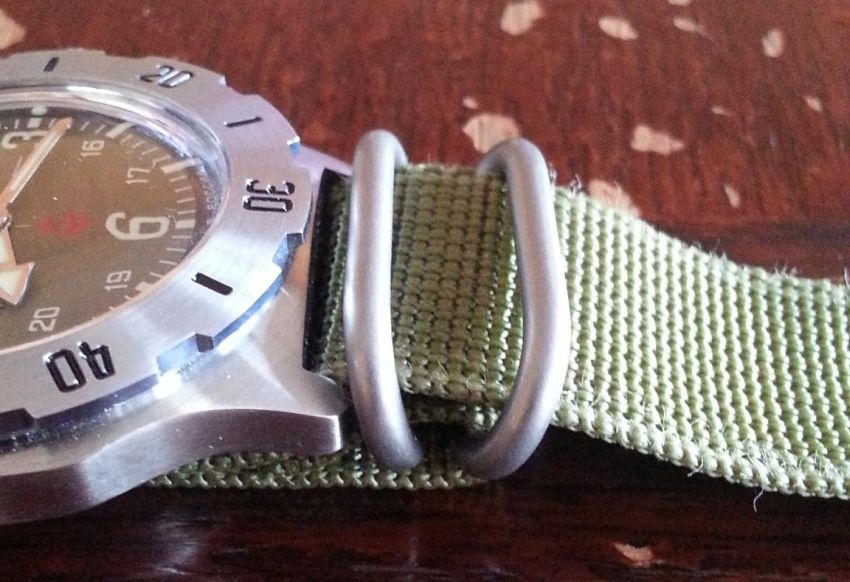 The most used material in the manufacture of NATO bracelets is nylon.

Leather is also used, then it is thin enough to give it the flexibility to slide under the bars. 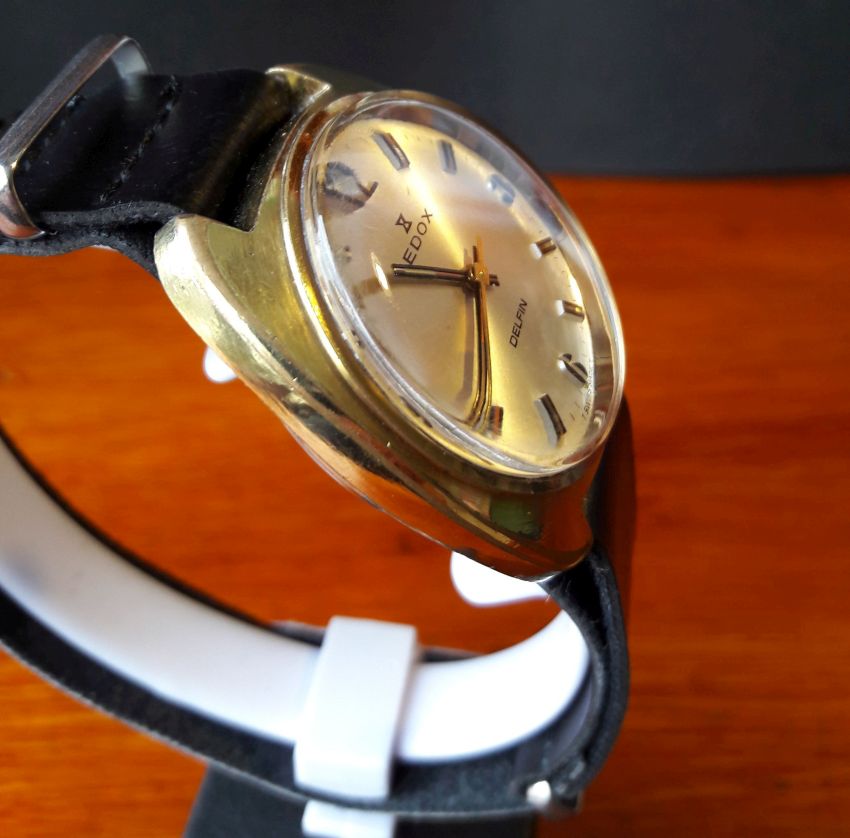 You can also use natural Jacquard fabric, as in the Tudor Black Bay Bronze. Keep in mind that this strap is not a true NATO: it is a one-piece fabric watch strap, in which two bars that are fixed on the horns are inserted.

Wink with these bracelets from Colonna, a small Italian brand that makes bracelets made of ready-made fabrics, including this one that was completely combined with my shirt! Terra Cielo Mare has developed a very fine and very resistant carbon fiber bracelet. The aesthetic aspect is not necessarily suitable for all models, but it is an interesting development. 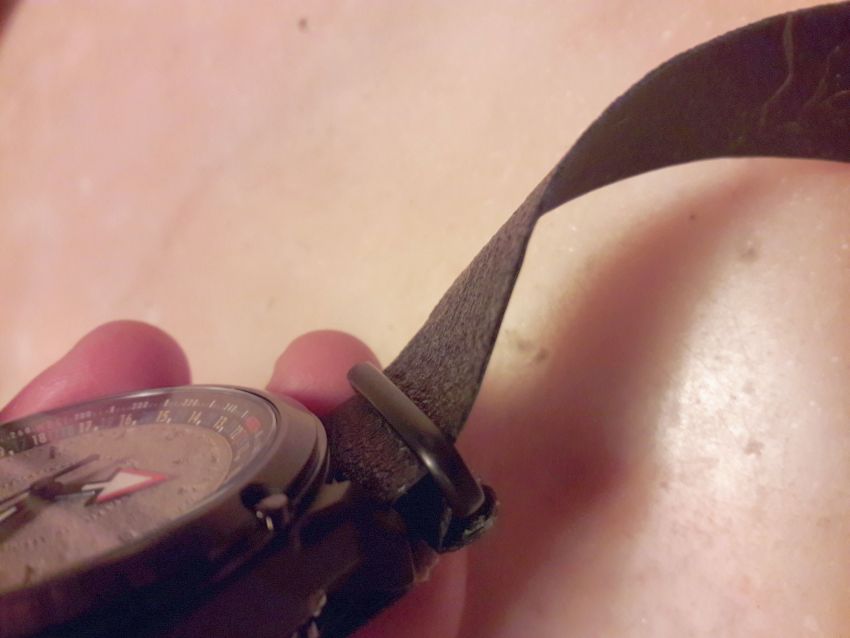 Here are some concrete examples to complement these explanations.

This 70’s Ollech & Wajs military is equipped with a bracelet almost compatible with the G10, apart from rounded loops and seams: 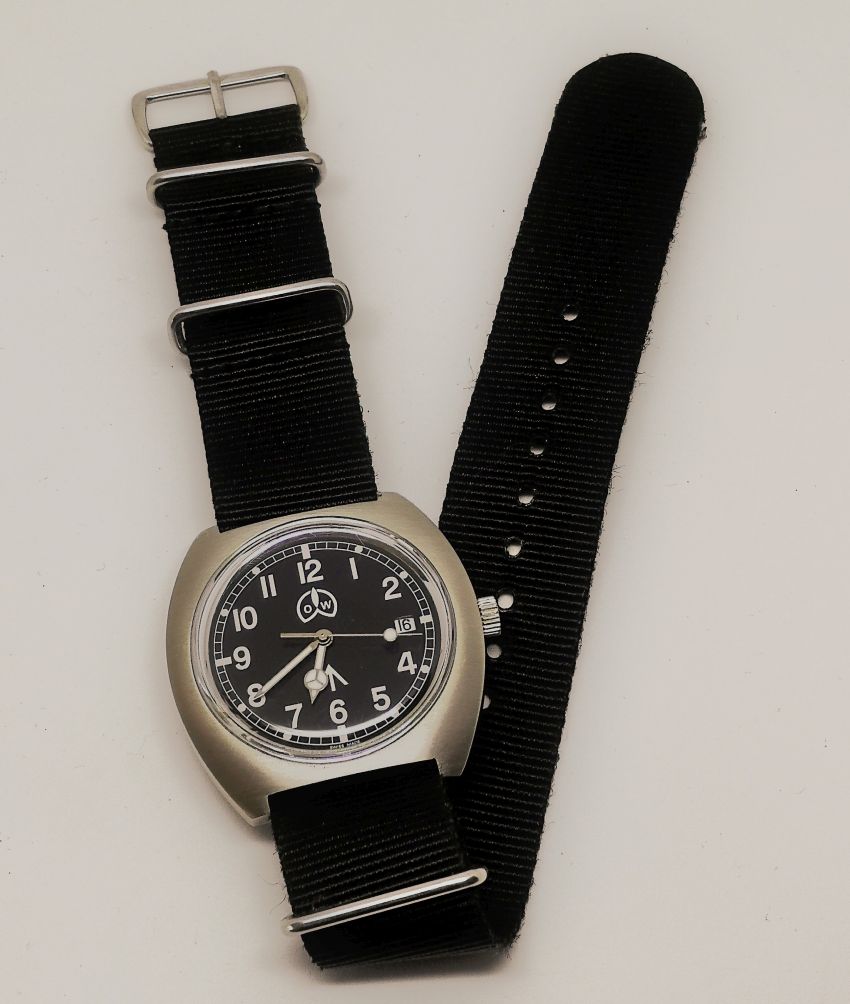 These Daniel Wellington bracelets are a NATO-RAF mix, with the nylon hoop: Here is a variation that I haven’t talked about yet: the NASA bracelet. It is particularly long and equipped with a velcro strap, which allows the strap to be attached to an astronaut suit, as for the Speedmaster in the new movie “First man”: 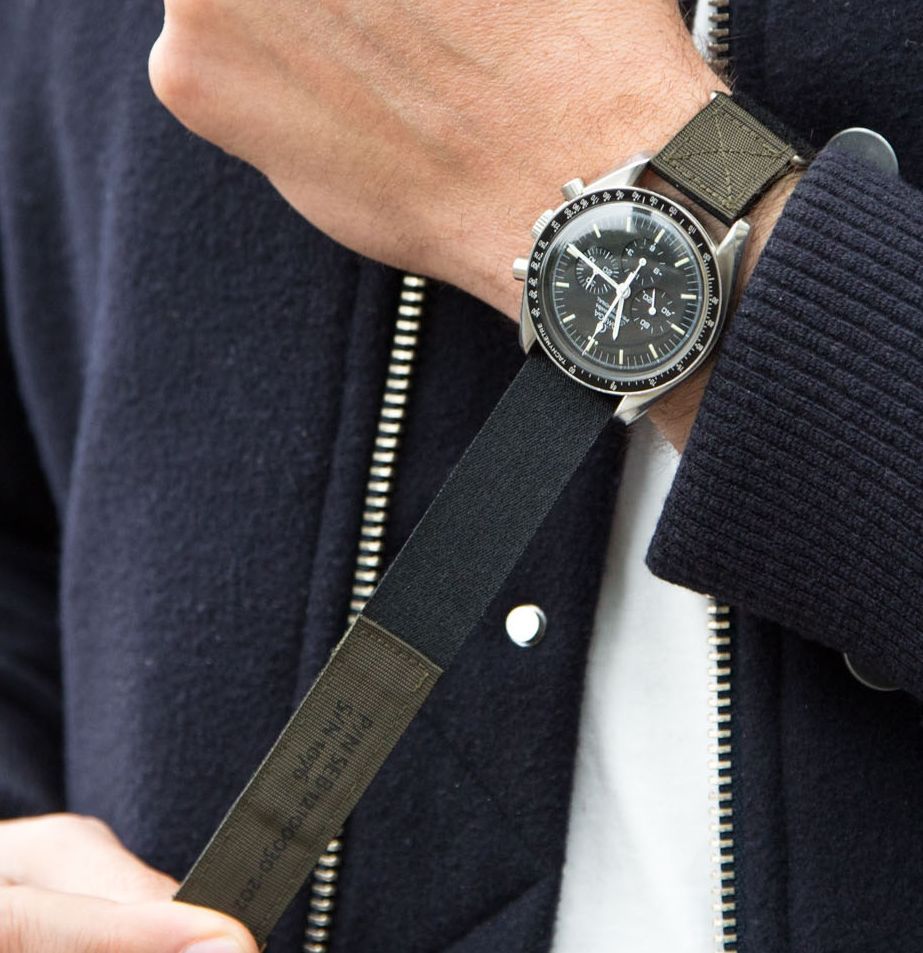 But there are also low quality bracelets, and here is an example: nylon too thin, poorly heat sealed, the holes were poorly made and the buckle rusted. In short, quality comes at a price, and below € 10, beware!

The NATO belt of James Bond

He says somewhere that you can’t talk about a NATO bracelet without talking about the famous Goldfinger scene in which James Bond turns on his Rolex MilSub (Military Submariner) with his lighter.

You can read everywhere on the net that, in fact, it is not a real NATO, because the film, which was released in 1964, could not meet the G10 standard defined by the Ministry of Defense in 1973. It is very clear, and I can add that the color does not conform to the Dark Gray Admiralty and that its width is clearly smaller than the regulation of 20 mm. From this point of view, the watch also looks ridiculous with this little bracelet. But the most important difference is that this bracelet does not have the characteristic loops of the G10. Therefore, it is a simple braided nylon bracelet with a simple buckle.

Corvus Watches introduced this iconic model, here it is in a 1967 Rolex Submariner 5512.

Why replace your bracelet with a NATO?

There are many “technical” reasons why you should replace your strap with a NATO, but the best reason is simply that it makes you feel you have a new watch.

Take your old watch that sleeps in a drawer, the one with the slightly damaged leather strap, put on a NATO strap, give you a new chance of life and enjoy using it again. Another possibility, NATO can change the character of a watch, since for this MAT California, delivered with a very austere rubber strap, ideal for diving training, but that with his sand colored NATO, Makes you want to go for a cocktail in the officers’ mess. 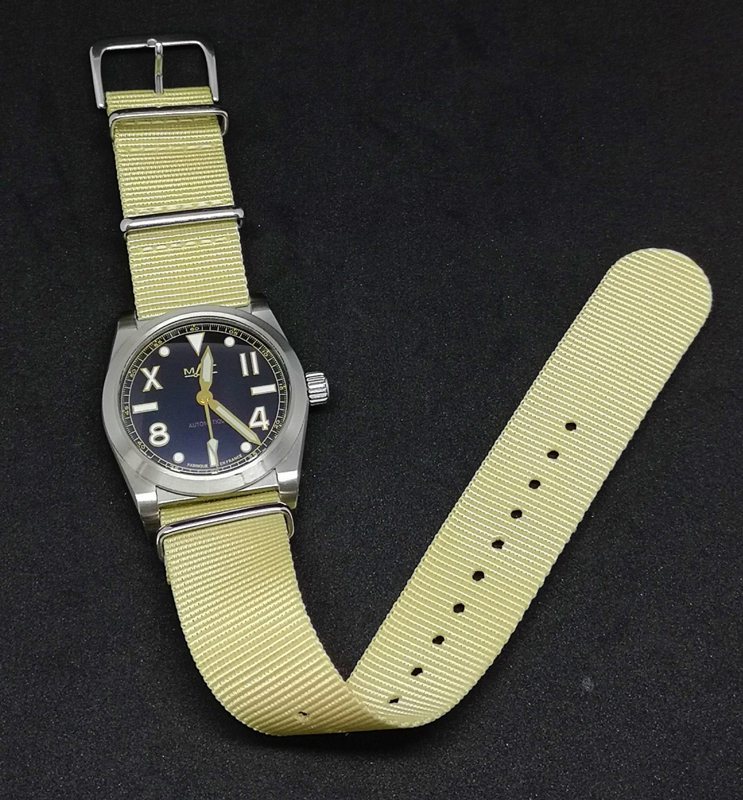 Now that you are familiar with the history of NATO and its various versions, all you have to do is try the experiment, if you have not already done so. Gavox Squad “Bomb Squad” before and after NATO