After the undeniable success of the Timex Q reissue, the American watchmaker does it again with the M79 automatic. Here, the red and blue “Pepsi” bezel from the Reissue gives way to black and blue, strongly inspired by the Rolex Batman. Discover without further delay our handling of TW2U29500.

Let’s not waste too much time in history to focus on what interests us most; the revision of the M79. Essentially, what you should remember is that Timex has been a great watch name in the United States since 1854. Originally called the “Waterbury Clock Company”, Timex has particularly contributed to the democratization of watchmaking by offering – affordable time and a Great value for the price. 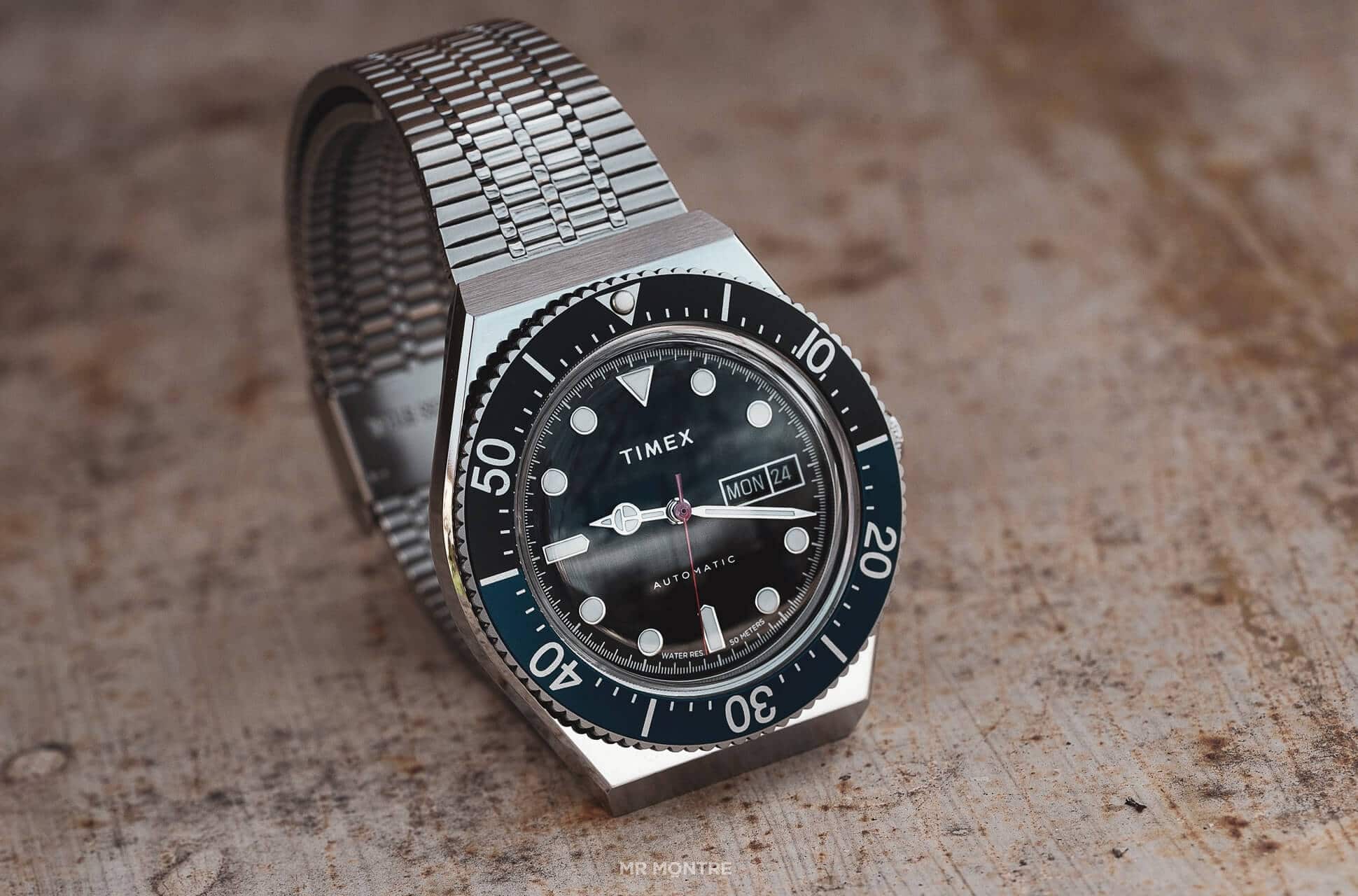 We were pleasantly surprised by the Q Timex. Resolutely vintage, this is a model that has found real success in our columns. His biggest success was especially being almost exhausted on launch day. Even more surprising, he found an unexpected welcome among watchmaking purists, often resistant to quartz movements considered “unattractive.”

With their 70s relaunches Timex here he signs a return through the front door in France and Europe. The M79 Will it have the expected success? Is the quality / price ratio as good as in the previous model? The answer in the rest of our review. 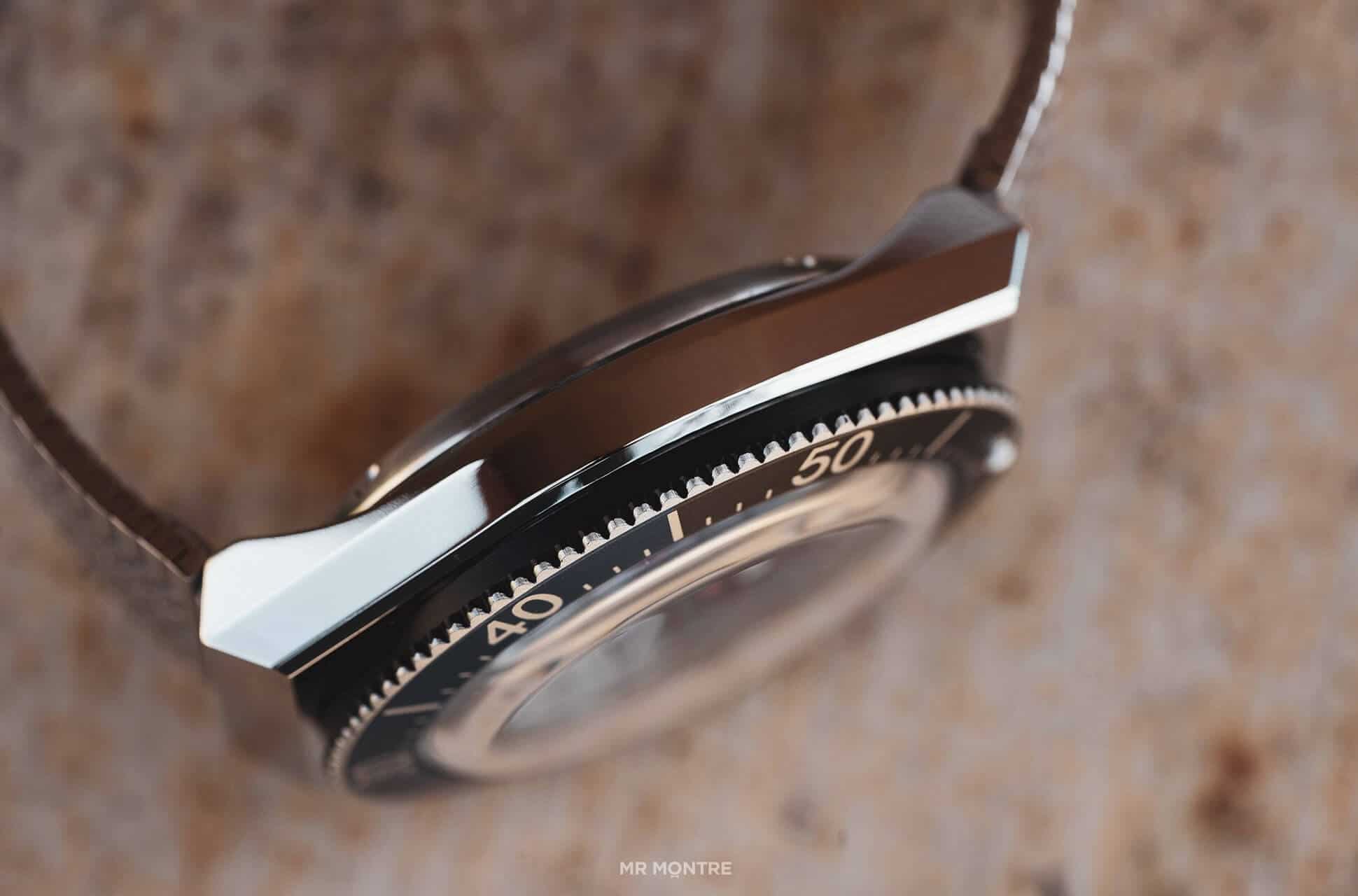 The box has not changed much compared to the Q. The recipe for his success has been reused; A very angular, brushed case with polished bezels, curved acrylic glass, and a one-way bezel.
Slight small change in proportions. The TW2U29500 measures 40mm in diameter against 38mm for the Q. This slight increase was necessary to accommodate the automatic movement that requires slightly more space than its quartz cousin. But I’ll tell you about it later in the rest of this review.

How to get closer M79 not to mention its 120-click unidirectional bezel? As a “Batman” GMT-Master II from Rolex, the bezel is blue and black this time. Less iconic than the Pepsi’s red and blue, it’s especially less sporty and may be more suitable for people who want a more discreet watch, more happening everywhere. Plastic is less qualitative than its cousin. Q Timex.

As for the bottom of the case, it is transparent, screwed and has the classic information of the watch engraved, including its water resistance. With its 5 atmospheres (50 m), you can take a shower or walk occasionally in the water, but nothing more. You will understand that as a diver she only has style.

The dial and the hands

It is under a curved plexiglass crystal that we discover the round and black sphere of this TW2U29500. At 12 o’clock, the bottom is marked with the Timex logo, while at 6 o’clock the mention “Automatic” appears.

The two chrome hands and the red seconds hand go through the hour markers in a geometric way. The hands and the indexes are covered with a luminescent treatment. As for the railway, it follows the contour of the dial and has a white mark for the minutes and seconds.
A rectangular window is at 3 o’clock. Allows you to view the date and day of the week using its first 3 letters (in English).

To reinforce the vintage side of the watch, Timex puts on his folded stainless steel bracelet again. Brushed and polished, completes the finish of the case. To close it, easy, a clip loop lets you keep this M79 on your wrist Its space is 20 mm. Two millimeters more than the Q, justified again by the increase in the size of the case.

Get out of the reissued quartz, our M79 The Miyota 8205 automatic movement features a test movement: a 21-jewel automatic caliber oscillating at 21,600 A / h and a theoretical power reserve of 40 hours. Small plane, the noise generated by the oscillating mass. Otherwise, it is a “tractor” movement that during our test deviated 1 minute per week. 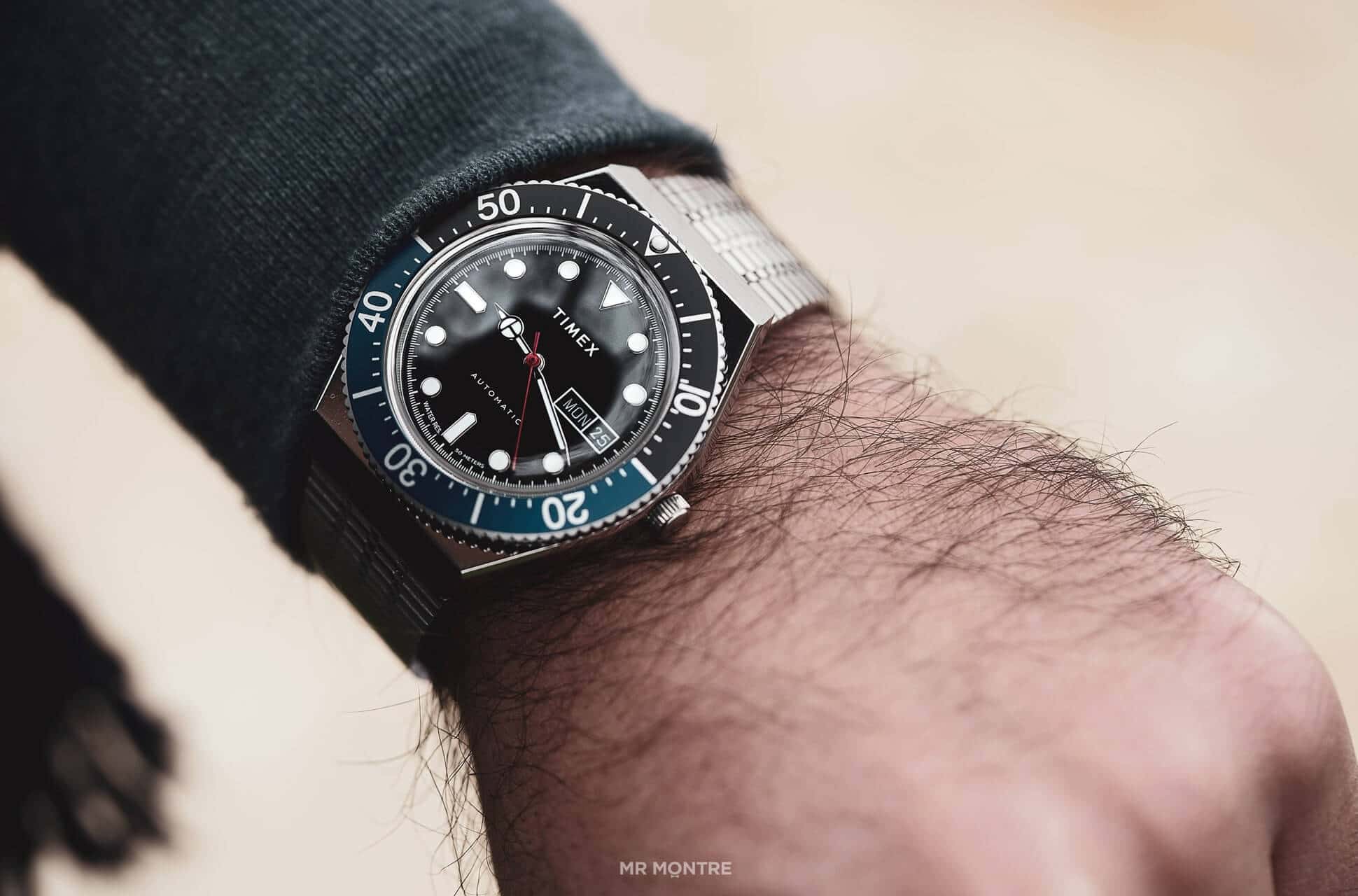 Design level, if you liked the Timex Q then you will like the M79. She does the work and Timex pulls her out when vintage style is at its peak. We noticed some small flaws in the finishes, especially in the bezel that looks a little “cheap” and the rotor that produces a noise that is not pleasant at all. However, given the proposed price of 279 euros, we can pass up a few small flaws.

Do we recommend this watch? Timex M79 TW2U29500 Automatic ? Yes, no problem. But for our taste, the quality / price ratio of this watch is less good than in the Pepsi.

A fan of watches and new techno, I share my findings, tests and watch reviews on Mr Watch.